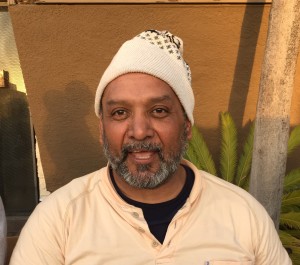 I became what I hated the most-I became my dad. And in becoming my dad, my worst enemy, I ended up hating myself. I became my own worst enemy. The enemy, the beast within, had dominion over me. The beast controlled my thoughts and my actions. It has done more harm to me than anyone or anything else has. It was my greatest handicap. I was a victim of it…or so I thought.

I, Miguel, am second youngest of 12 children. My parents, Antonio and Margarita are from Juarez, Mexico. I was born in El Paso, Texas. I grew up in the roughest- toughest streets of East Los Angeles. In my neighborhood there were only two places our parents and cops could not find us…It was Raspberry Hill and the Calvary Cemetery. They were the places the sheriffs would not dare enter.

My home was violent; especially when dad drank. He would hit my mom so bad that none of us would dare get in the middle to stop him. After the hitting would stop, Mom would gather us and talk to us about how good God is then she would teach us to pray. I remember she would say to me, “Mijo (son), pray to God. He will change things.” So I did- I prayed and prayed and prayed, “God, please stop my father from hitting my mother.” That never stopped. So somewhere around age eight, I said there is no “F” God! I mocked God. I did not want to listen to or hear anything about God.

Around 8 years old I was shoe shining outside the bar, “The Latin Lover” to help my mother with money because Dad was too busy at the bars, playing pool, going to the horse track, and playing with different ladies of the night. I slowly became the man I hated the most. I became my father.

At 8 years old, I too started to walk deeper into darkness. One night shoe shining, a junkie tried to steal my shoe shine box. Because I loved to play baseball, I carried a baseball bat. So, I got up, started to run after this junkie. I caught up to him and swung the bat. I kept swinging until the man whose shoes I was shining stopped me. He said, “Stop! You’re going to kill him.” I said, “”F” him! He deserves to die.” He laughed. The man I was shining shoes for was a big time drug dealer. He turned and looked at his partner and said, “Did you see this kid, he has no fear!”

The two older men then took my shoeshine box and gave it back to me. Then the two of them were walking me back home as they were evaluating me. Both of them asked why I was shining shoes so late. I said that Mom needs help in the house. Then they gave me $50 and asked me if I wanted to make more money. I said “yes” without hesitation. This took my down a dark path.

Things in our families happen because of family patterns. I lived a chaotic life and blamed dad to the point of hating. But I too took my family, my children, on a boat ride where there was nothing but thunderstorms. I failed my kids. It’s hard to think about. It’s hard to say, but it is true.

I was released from prison to find one son that doesn’t speak to me and is all over the internet rolling blunts; another son a drug dealer, and my beautiful daughter was free-spirited and rebellious. Two of my girls followed the example of their mother and were active in church. Although my children were happy to see me, I was mad at the world for what had become of my babies. My anger, coupled with the beast within, propelled me to fall into the same lifestyle and associates I had had prior to going to prison. After finding that I was still with my old associates, my children stopped visiting, and not long after that they stopped answering the phone.

My depression had me contemplating suicide. The beast encouraged these thoughts, saying, “You are no good. You have no value. You failed your children and they are embarrassed to call you Dad.” I just wanted to die.