Do You Have A Holiday Party Coming Up? 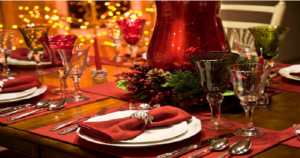 The holidays are right around the corner and that times perfectly with the end of the year and also the start of a new training season (and new teams). Are you hosting a holiday party or attending one?

We have been approached by some different people recently that are finding ways to celebrate, and also give back. Many of you know about FullerTrot. This is a Thanksgiving morning run that is planned by a husband and wife that have done this for a couple years and ask for donations for a charity. 100% of the proceeds this year will benefit Up and Running Again. Donations will go even further with a matching donation.

Multiple Miracle Moms, a group of moms of multiple children (that coach Bethany is a part of) is using Up and Running Again as part of their charitable community outreach at their holiday party. They will be collecting used running shoes, used running clothes, monetary donations and gift cards (eg, Sprouts). They also plan to have raffles to raise money. Another supporter of URA recently had a work party celebrating a milestone year in his business. He asked for shoe and clothing donations from his guests.

We are starting up a new group at the Las Vegas Rescue Mission in December. Orange County groups will start in February (with some possible new facilities). We are looking to possibly get a group in Michigan as well as Spokane, Portland and maybe Seattle. In order to get all these groups going, we would love help in fundraising to make it possible.

Beyond personally donating, is there a way you can enlist others to help? Here are some ideas:

-Sell raffle tickets at a holiday party. Get some businesses to donate items for the raffle or give half the money to URA and the other half for prizes
-Have a competition (eating, fashion, etc) where people pay to vote or sample foods
-Sell balloons with unique tickets and burst them in public to look for the winning tickets for several prizes.
-Host a rummage sale (ask those attending party to bring items for this)
-Organize with a restaurant to have a certain percent of the proceeds to go to URA. Have your celebration at the restaurant or hand out flyers to those at your party for this.
-Play Bingo. Charge a fee and get the prizes donated
-Have a gold party (sound like Christmas decor?). People bring unwanted gold jewelry and it gets collected and turned in for cash

What ideas do you have?