Barnabas of the Week Award

Who is Barnabas, and why does the OC Rescue Mission and Long Beach Rescue Mission call the award the “Barnabas of the Week” Award?  The first mention of Barnabas in the Bible was in Acts 4:36-37.  It says, “Joseph, a Levite from Cyprus, whom the apostles called Barnabas (which means ‘son of encouragement’), sold a field he owned and brought the money and put it at the apostles’ feet.”  We learn that although his name was Joseph, he was nicknamed Barnabas because he was known as ENCOURAGING.  And he was generous in his encouragement.

In Acts 9, Saul, who had been a persecutor of the Jews, turned his life over to God and God chose to use him.  However, when he tried to join the disciples, they were scared of him, so Barnabas, “took him and brought him to the apostles. He told them how Saul on his journey had seen the Lord…”  He was not only encouraging, but he was BRAVE.  He was WELCOMING to Saul, when others wouldn’t come near him.  And he was PERSUASIVE with his words.

This week our Barnabas Award for Orange County Rescue Mission was Sarah. Says Coach Greg, “Even though she is one of the slower runners she encourages others often as the pass her.” Coach Rich from Long Beach Rescue Mission gave Andrea (“Dre”) the award because, “Thursday she was so excited about the work-out she was doing cartwheels when I arrived.” 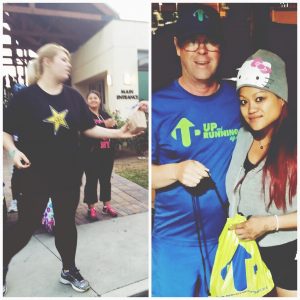 A Whole Lot of High-5’s on the 5k! April Shares About Her Journey