Below is blog entry written by Jeff from Orange County Rescue Mission. 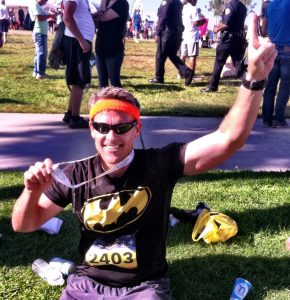 When I first came to OCRM, I was at an all time spiritual low in life. I had turned my back to God and tried to embrace a life of sin for the better part of my adult life. After arriving here and laying around for a week God said get up and go see about this Up and Running Again program that my then roommate had told me about.The program had already been going a couple of weeks but I thought I would go out the next morning and see if I could join. I spoke with [Coach] Greg and he realized that running was a passion of mine and agreed to let me join.

So I began training for my first half marathon in early Feb 2016 (OC Marathon). Training was grueling at times and I didn’t think I was going to make it through. There was a three day period I had to stay off my feet and if I wasn’t able to run after those three days I was going to quit. I spent those days praying and being in the word. When those three days were up not only had this horrible knee pain gone but never returned. Finishing my first half marathon was a neat accomplishment but it took a backseat to the training that gave focus to my running for the first time in my life and the fellowship, mentoring, coaching and support I received from Greg and the Up and Running Again staff and volunteers was a true blessing.

I am ultra competitive so running a 2:07 time forty pounds over weight served to motivate me to take on a full marathon in Oct. 2016. I dumped 37 lbs of fat and added some muscle to my body and was able to complete the marathon in 3:54. The training wasn’t twice as hard as the half it was 10x as hard. Six day a week of hard long running for fourteen weeks. 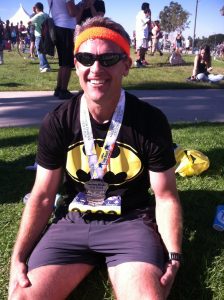 Again Greg was instrumental in developing a training plan for me that worked and his expertise in endurance fitness is only surpassed by his spiritual mentoring and coaching. Twice he has been by my side as I limped my way across the finish line encouraging me right to the very end. In fact had Greg and my friend Ben not been there to encourage me I would have not finished the race when I did. I pulled a calf muscle right at the half way point, I was cruising to 1:50 first half and remembered thinking I can easily do better on the way in. Right then my calf popped. The only think I can liken it to is cracking your back it started in the middle of my calf and felt like it tore all the way down to my upper ankle. I thought if I stop I will never start again. I kept going but a hundred yards down the road or so , I had to stop the pain was too much. I prayed for God to please help me get through this and if it’s not meant to be let me let it go right away and move on. After massaging and praying I was able to start running again in moderate to pretty heavy pain at times until the 20 mile marker that is where the pain was to much to run continuously so it became a limp, run, walk for the last six miles.

To finish was bitter sweet. I missed my goal time by four minutes after hurting myself, which was still quite an accomplishment, but feel like I left a 3:40 or better time out there. It has been about eight days since the race and I feel good enough to try to run tomorrow. I’m going to start with 3 miles and see how it goes. I am going to do 8 weeks of leg strengthening in the gym and then start training for the LA marathon. I want to know what I am capable of. I hope one day to become part of the Up and Running Again team on a more permanent basis. What a great ministry.

Up and Running Again Half to an International Full Marathon San Diego Rescue Mission Returns!