Up and Running Again Half to an International Full Marathon 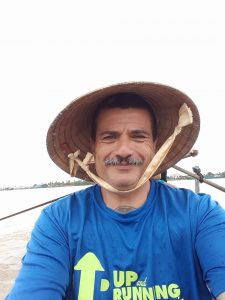 After spending 56 training days with participants and hearing their life stories and investing in their lives, we often wonder where they go and what happens in their life after finishing their half marathon. Sometimes the runners come back to do another training and race with us. Sometimes they relapse and leave the mission. Other times they go on to move out, get a home, get married and get a job.

Recently we caught up with one of our alumni, David Noriega. David has had quite a journey. He was first arrested when he was 21 years old and then was in and out of jail for the next 13 years. He has battled through alcohol and drug addictions since he was 13 along with heroin and cocaine overdoses.

David joined our Up and Running Again program while he was living at the Orange County Rescue Mission. He trained for and completed his first half marathon in Long Beach in October of 2014. Then just 7 months later he finished a second half with us, the Laguna Hills Half Marathon.

During his time training he often prayed. “By the time I ran my first marathon, it was a healing process for me.” But, as with others sometimes, he relapsed. “It was necessary though because now I’m able to truly appreciate and value my sobriety. I ended up homeless in the desert of Victorville where I had a near death experience. I almost froze to death. But feeling spiritually dead and my kids being embarrassed and ashamed of their own father is what drove me back into recovery.”

He ended up going for help to the Midnight Mission in Los Angeles. There he connected with a group of runners that is led by a judge who wanted to help and see people on a different and more personal level than in his job.

Noriega’s foundation with running with Up and Running Again paved the way for his involvement with this new running group. This running group trains for all distances of races, including a full marathon internationally each year. This summer, on August 6, 2016, David had the opportunity to run the DaNong International Marathon in Vietnam.

The experience of running in another country exposed David to the conditions that others live in. He realized that he has so much that he takes for granted. He also has had a tough relationship with his children. He said, “From this marathon, I got amends for my kids. I was able to earn their respect,” he said. He also has had opportunities to share his experience with others. He shared at the UCLA school of medicine. On October 6 he will be speaking at the Golden Heart Awards in Beverly Hills.

Currently Noriega is an Assistant Volunteer Coordinator at the Midnight Mission, scheduling volunteers to feed the homeless community on Skidrow. He is currently looking for a full time job. During David’s training with Up and Running Again, he trained with Justin, who was another resident at the mission. Justin has since graduated from the mission and has been praying for David for a long time, even supporting him in his marathon trip. David says, “God is amazing. He gets all the honor and glory. I never forget you guys [Up and Running Again], especially coach Steve and Justin.