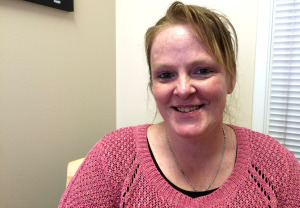 Two weeks ago, Kim did something she never imagined possible. A 13.1 mile half marathon race through downtown Portland. And she ran every inch of the race without stopping a single time.

“When I got to the finish line, I couldn’t even believe that it was real. Tears instantly started coming down my face. I saw all the people that had come out to support me. It was the most wonderful, overwhelming feeling – I just couldn’t believe that I had actually run the race. I’d done it. That’s not something you just do every day.”

Kim’s words sink in deep as she describes her past. Just last year, she was homeless, addicted, and on the verge of taking her own life. She’d lost her children, lost hope, and finally lost the will to live. As a last-ditch effort, she decided to give Shepherd’s Door a chance. Entering our women’s yearlong, residential addiction recovery program was a huge step for Kim, but the pain of her past still clung tight to her.

“I would struggle to just get up in the morning. I battled with depression and just didn’t want to face reality.”

But as time went on, Kim began to forge friendships with staff and other women in recovery. She took addiction recovery and spiritual formation classes and began to grow in her faith and gain strength against addiction cravings. And then, just a few months ago, Kim found out about the half-marathon running club that we offer through Up And Running Again.

“I heard about the program and thought there is no way I could ever do that. I thought, ‘I can’t even run for 5 minutes without stopping.’ Plus, I’ve smoked since I was 10 years old, and I have asthma. There’s no way this is for me.”

Despite her self doubt, she kept the idea in the back of her mind. For weeks, one of Kim’s friends at Shepherd’s Door persistently asked her to join the club. Finally, Kim gave in and signed up. Things were not easy at first. “I’m not kidding…I really couldn’t run for more than 5 minutes without walking. My head kept telling me I should quit because I’m just going to disappoint myself. But I kept telling myself that I’m not a quitter. I battled with that for a long time. I wasn’t as fast as the rest of the group, and I felt lesser at first. But I said no. I’m not a quitter. I pushed through that.”

Training for the race stretched Kim to her limits. Every bone and muscle in her body ached, and she would often have to stop and walk during the training runs. She even missed training sessions due to injuries. The other runners were faster, more athletic, and didn’t miss any training runs. But Kim kept pressing on. She got healthy, and kept pushing her body to its limit. Soon she began to realize that as draining as the runs were on her body, they were equally as energizing to her mind. For the first time in her life, Kim felt vibrantly alive.

“I started feeling better about myself. All my negative feelings started dropping off as I ran around the track and the streets. And soon after that, I started getting more physical energy, too. For the first time, I actually enjoy getting out of bed in the morning now. I’m ready to get up and do things.”

After 14 weeks of training, race day came on October 26th, 2014. Kim was sure the run would be extremely challenging, but she was equally confident in her ability to succeed. She prayed that her hard work would be rewarded.

“It was hard. We ran up the hill by OHSU, that was really difficult, and it was a turning point for me. Physically and emotionally. My mom actually died at OHSU, and I had harbored a lot of resentment toward the doctors. As I ran by, I was praying the whole time, telling God that I forgave them, the doctors. It was raining really hard, so you couldn’t tell, but I was crying. It was my way of getting closure and closing the door on resentment. I knew I had to release that.”

With the steep hill and emotional baggage behind her, Kim flew down the other side of the hill. With a light heart and renewed strength, she pressed on, hardly noticing each mile marker as she passed.

“For the first time in 14 weeks, I actually enjoyed the running itself. I didn’t lose my breath, I ran at a steady pace, and I just enjoyed the scenery. Running has also been my time with Jesus. I have ADHD, so having a quiet time has always been hard for me. But when I run, there’s nothing else my mind has to focus on. I pray throughout each run. And if I had any doubts about prayer before this, those doubts are out the window.”

When Kim crossed the finish line, she’d shattered her expectations by completing a full 13.1 miles, something very few people can claim to have done. She accomplished her goal and proved to herself that she really can do anything she puts her mind to. So what’s Kim’s next big goal?

Kim isn’t the only resident from our recovery programs that ran the half marathon. She’s one of over a dozen men and women who trained for and completed the race, each one pressing toward their own recovery in our New Life Ministry. And earlier this year, dozens of other residents completed a half marathon, too. Several of those men and women have already graduated from our program and have been restored to families and jobs. For them, crossing the finish line isn’t the end. It’s just the beginning.

Printed with permission from the Portland Rescue Mission’s website