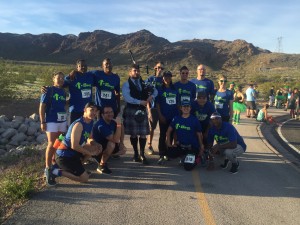 After dropping off my three older kids at grandparent’s house, my husband, Jason and baby and I hopped in our Prius on Saturday morning and headed out to Las Vegas.  As soon as we got into town, we headed to Henderson to run a myriad of errands ranging from picking up dessert, to picking up our pasta dinner.  I was so impressed that Whole Foods donated all of the pasta, salad, dressing and rolls for the banquet!  We showed up right at 3pm when packet pick up began to pick up the bibs for the team.  We didn’t arrive any too early as an enormous line formed after us.  Or that could be as a result of picking up 12 BIBS!  Sorry!

We drove straight to the Las Vegas Rescue Mission at 4pm and pulled up to their dining area.  The director of their dining operation, Mark, was super helpful in getting us anything we needed and showing us around the kitchen.  They had a room with portable walls that was partitioned off from the regular dining hall for us to use.  Another person from the mission was there to make sure the audio and video worked as was set up properly.  Jason and I set to work preparing for the banquet.

Frantically finishing up tossing the salad and mixing the lemonade, we began to have the first guests at 6pm.  Everyone from the team came to the banquet, with the exception of one volunteer.  It was wonderful to have sisters, parents, fiancee’s of the runners there. 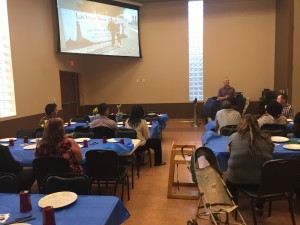 The team seemed to really enjoy the photos and videos that we showed.  A pastor friend (and runner) of Dean, the senior director of recovery at the mission, spoke about races and that sometimes when we feel the most useless, God finds ways to use us in our weakness because He’s already completed the race for us.  It was funny and inspiring.  Completion awards were given, and the Excellence Award was given to Ronnie Manning.  Concluding at 8pm, we cleaned up and headed to the hotel to get some sleep before the early morning.

Our 4 am alarm came WAY too soon!  And after getting ready and feeding the baby, we were off on our hunt for coffee and something for breakfast.  With Starbucks opening later in the morning and no other coffee shops in sight, I realized that getting coffee in Las Vegas is about as easy as winning the jackpot in a casino.  Finally pulling into an AM/PM, we procured our precious coffee and found some “baked fresh daily” pastries.  They very clearly were baked fresh…yesterday.  Oh well.

Pulling up to the Rescue Mission at 5:30 in the morning, everyone was out and excited.  Loading up a van with the runners and a bus with others from the mission that wanted to come and support them, we headed to the race.  Apparently us, the out-of-towners were the navigators to get to the race.  Thank goodness for iPhone directions! 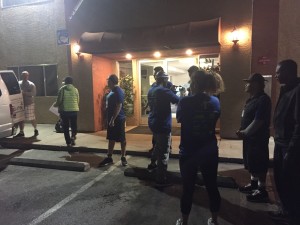 Arriving early, Dean treated everyone in the group to coffee in the casino.  Hmmm, apparently good things come to people who wait.  Did I mention that I’m not that patient with getting coffee in the morning? 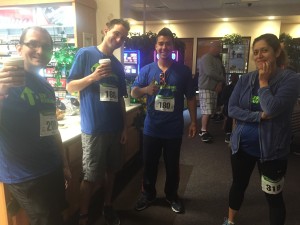 We exited and gathered around to pray.  I’m always struck by the passion and heart for Christ that these participants have.  Where sometimes, ashamedly, I will be with a group of churchgoers and nobody speaks up to pray…this group I couldn’t even get a chance to pray because everyone jumped in constantly to pray without ceasing!  I find that being with this group inspires me in my faith to be more bold and passionate. 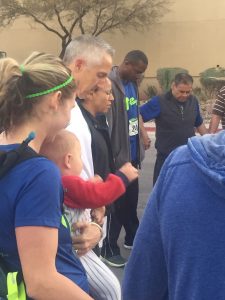 Following the prayer, we begin the hike down to the starting line.  Yes, it was no joke.  Fairly steep in areas and with dirt and loose gravel, we were careful of our steps.  The beauty of the rocks, lake, and early morning sunlight was breathtaking.  In about a half a mile, we get to the finish line area where we can take photos, use the porta potties, and get a lay of the land.  Did I mention the bagpipe player?  Oh, and that Dean was wearing a kilt.  Being from the Northwest, he said it is fairly normal there to wear a kilt.  Not sure I buy it.  It was a nice touch though for this St. Patrick’s Day run. 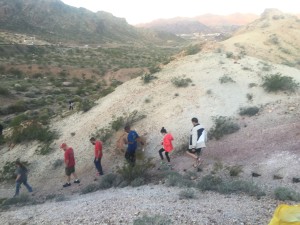 Making our way back to the race start, we gather behind the starting line arch.  Unlike large races, this race didn’t have corrals, pacers, or the National Anthem.  We wore our timing chip around our ankles like a triathlete, instead of on our shoes.  They yelled for the start and we were off.  After a brief downhill, there was a very long and gradual uphill incline for several miles.  We hit the turnaround and came downhill back towards the start and then continued the opposite direction. 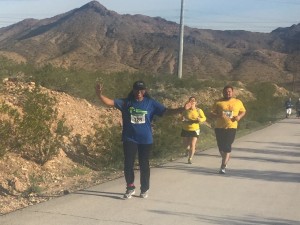 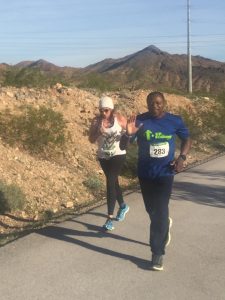 The route was mostly on a gravel trail that was relatively flat with some hills.  We ran through the tunnels and enjoyed views of the lakes.  I enjoyed seeing everyone each time we ran back towards the rest of the racers.  The sun was intense, but not too hot.  There was some nice shade, especially in the tunnels, but the shadows and uneven ground made it hard to go in and out of the light.  Ronnie and Lily ran at the back of the URA group and Lily told me partway through that Ronnie fell twice.  Not surprising, because of the aforementioned reasons.  I found out after the fact that Lily, a nurse, took off her shirt to wrap Ronnie’s arm.  These are the inspiring stories of races, not those who finish in first place. 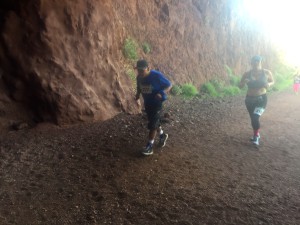 Getting to around mile 10, we were all in for a surprise as the trail turned into what one participant called a “goat trail” as it switchbacked down the rock to the dam area.  At the bottom, it turns out, was the turnaround and then we had to wind back up the same switchbacks.  Whoever created that part of the route had a sick sense of humor! 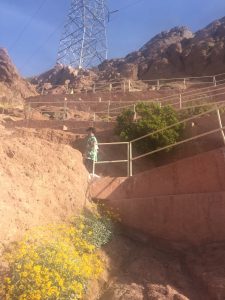 Everyone made it to the finish, but not without their battle wounds.  Ronnie having fallen, Nathan pulled a muscle, and Matthew was walking like someone from another planet.  But we were all finishers!  We shared stories, hugs, and for some, the dream of doing another one someday.  Dean was already talking about potential races for the Fall.  I can’t wait to join up with this group again!