The runner of the week became the runners of the week. Dayena Bahena, a new edition to the Nova Group, inspired her entire family to join our group.  From the beginning of our training Dayena became  the top female runner of the group. She likes to keep up with the guys in the front. Her family began in summer training sessions with walking, and as the season progressed they began walking and running. They can only train on Saturdays now, but are almost running the entire time! They have blessed our group with water countless times and surprised us with pizza and salad! It is a delight to see how participating with Up and Running Again can spur on an entire family to do something they thought they could never do. The Bahena family would like to participate and complete the Long Beach 1/2 marathon with the rest of the URA group on October 13th, 2013. 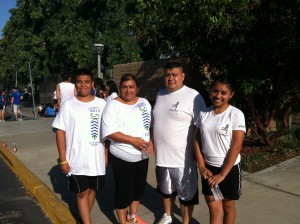