Do you ever have a new experience where you come away and your head is swimming with all the different conversations, observations, and situations? Where it makes you see life from another angle? Where you feel like you can jump in someone else’s skin for a bit, walk around, and see how life might have taken you down a different road? 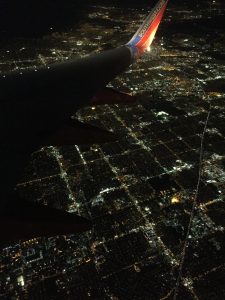 Friday evening I boarded a plane to Las Vegas which arrived around 9 pm. Knowing that in just 9 hours I would be meeting up with the runners at the Las Vegas Rescue Mission to run with them, I had asked the coach ahead if there was a bed to sleep at the mission. In my mind, it didn’t make sense to book a hotel room for such a short period, just to sleep, and then have to figure out early Saturday morning getting a taxi to the mission.

So my journey began. When I asked the cab driver at the airport to take me to the Las Vegas Rescue Mission, he just gave me a confused look, and then asked “Where?” again. With him having no idea where it was, I looked up directions on my phone and handed it to him. Must not be an everyday occurrence for him!

Arriving at the mission, there was dialog back and forth on a walkie talkie until the front gate let the taxi through. Apprehensive if this was a good move to stay at the mission, I get out of the car. My hesitation gave way as I spotted out front one of our previous Up and Running Again participants who was one of the first people I befriended at the mission last year. With a guitar hanging around her neck, she gives me a big warm hug. One of the case workers who was standing near her also greeted me. I was beginning to get the excitement of an adventure in a new territory.

Walking inside the women’s hall, I was met by a gal that would show me to the room. But wait! They needed to give me a breathalyzer first. What?! I had never experienced that before. I’m sure afterwards they were laughing about the novice who they had to say, “blow a little harder” into the device. Sure, I get why they do it, just caught a bit off guard. 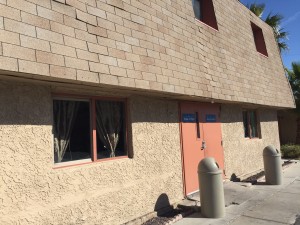 A woman helped carry a suitcase for me up the stairs and showed me to a small room right at the top of the stairs. Wow, I wasn’t expecting my own room. Not sure what I thought, but I think maybe I had anticipated dorm style sleeping, like some hostels I had stayed at in Europe. I quickly changed into my running clothes to sleep in and lay in the metal bed.   They had made the bed up nicely with double pillows and an extra quilt at the base that said, “Jesus loves you.” The bed squeaked if I moved much, so I lay still. The window was open and the sounds of the freeway and city with the cool breeze lulled me off to sleep. 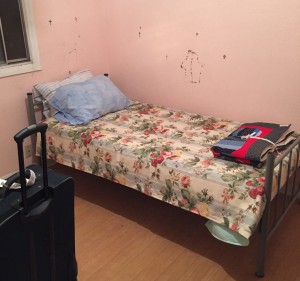 Having set my alarm for 6:15, I was awakened much earlier by a woman pounding on each door at 5:30 am. And shortly after I hear voices of women starting about their day. I get up to use the restroom and I find a girl already wiping down the sinks. I make a comment about how I don’t know too many people that clean bathrooms at 5:30 on Saturday morning. Not hesitating in her cleaning, she tells me, “I’m a runner, so I have to get my job done before heading out to run.” Well…nice to meet you! Most people have a tough time just making it up early to run, let alone clean a bathroom at 5:30 before going. Talk about dedication and hard work!

After getting ready and meeting the group, we read the devotional and head out on the run. This time we are running an out and back route from the mission. Not super scenic, but it sure is convenient. The weather is beautiful and we run through the city with the hotel skyline one direction and the snow topped mountains the other direction. 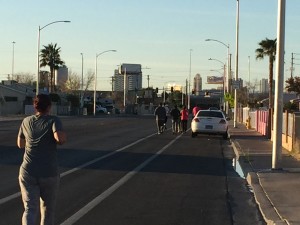 For a ways, most runners stayed together, but eventually they spread. I jog a bit between the groups, taking photos. One of the runners quietly asks me not to take photos of him. I try to gingerly ask him about that and between his accent and heavy breathing from running, I get pieces of his life history. He doesn’t want old colleagues to recognize him. He seems ashamed of them knowing him, so I wonder if he was in a gang or something. Don’t we always jump to conclusions? I ask what his job was and he tells me how he worked for a major newspaper for over 15 years as a writer. As it turns out, he is embarrassed for them to see what has become of him. I ask if he misses the writing. If he continues writing. Not completely understanding all of his response, I gather that he does do some writing. I offer him the opportunity to sometime do any writing about the Up and Running Again experience and send it to me.

I notice a girl starting to lag behind and looking like she’s struggling, so I head back to run with her. We talk a lot. I find out that she went to fire training as part of her stint in jail. She got out of jail about 6 months ago. However, she tells me that formerly she was in jail in California, but it was close to her home, so she was too comfortable knowing everyone in jail. When she got locked up in Las Vegas, it pushed her to want to change. I ask if she has any children. She tells me she had one that she adopted. I make some comment about how cool it is that she adopted a baby. Foot in mouth. She means that she had a baby that she adopted out to someone else. Of course, that makes more sense…my mind just jumps to what is in my sphere of people I talk to (and they talk about adopting). Seeing that she is very comfortable being open with me, I ask her if it was really hard to adopt her baby away. She says no, because she knew the baby would have a better life. That child is now 6 she says, same age as my daughter. I can’t imagine never knowing who my daughter was, and yet she said she has not seen her child. I make a comment about how that is true love of a mother, giving up her child to give them a better life. Her comment in reply left me heartbroken and struggling for a response. She said, “Not really…I chose my addiction over my baby.” What do you say to that? I need space and time to process how to respond. I’m not sure what we talked about after that, but the conversation moved on.

We finish the run and give out shoes. One of the runners asked what brand of shoe it was. When I said, “Lalo” shoes and tell them that they donated all the shoes to them, he tells me how timely these shoes were that he got. He needed running shoes really badly. Overjoyed at these shoes and how they fit he told me he would forever buy Lalo shoes. 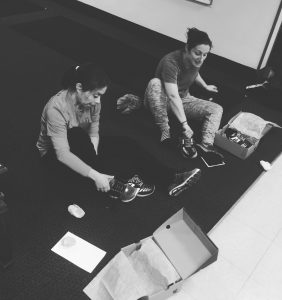 Having come back from the run past 7:30, the runners missed the breakfast time. One of the runners got special permission from someone in the kitchen to come in and have breakfast. She asked me if I wanted to join her. We wait as one of the other runners comes in and puts a hairnet on. His job for the day is in the kitchen. He fixes us up an egg sandwich and we sit alone in the large cafeteria to eat together.

We head back to the womens dorm and I wait for an opportunity to take a shower in the communal bathroom. I go in and start to get ready to take on a runner from our first Up and Running Again group comes in and I can tell she is dismayed. She has to get ready to head to work. No problem, I’m not in a hurry. I let her go first and hang out in the room a bit longer. Later after showering, I’m in the bathroom getting ready and a girl next to me is putting makeup on. I ask if I can borrow her hairdryer. That starts us talking. She tells me how she has 2 kids that she hasn’t been able to see in 3 months since being here. She misses them, but they told her they wanted her to do the program and get clean. Today she would finally get to see them. Her mom, who volunteers at the mission, was driving to pick her up. As it turns out, she offers to take me to the airport because she says it is on the way. I don’t want to eat into her free time away and with her family, but she insists. Yay! One less taxi ride for me!

As I’m continuing to get ready, the girl who is heading off for work comes in and shares with me how she isn’t where she wanted to be in life. She had hoped to graduate out of the mission faster. Get a job outside of the mission. Move on. Things hadn’t worked out that way, but she was still happy where she was. She was able to be a leader on this Up and Running team and encourage other girls. She was able to lead a Bible study. “God cares about the little things,” she tells me. To God the things that seem little to her are important in God’s eyes. “It’s about the little thing” she repeats repeatedly in our conversation. So much wisdom and reflection coming through her. When was the last time I’ve thought so deeply about things?

Before long I head off sitting in the back seat of the car with the two children of the woman who is driving me to the airport. We talk about life. Her mother, who already volunteers at the mission, decides she wants to volunteer and run a half marathon with the next running group. She’s always wanted to learn to run.  I’ve been struck by the kindness and generosity everyone at the mission has shown me.

As I’m dropped off at the airport, I realize that in less than 24 hours, I’ve been touched. I’ve learned about transparency. I’ve learned how hard these people work and how many obstacles they overcome just to make it out to run.   I learned that I go through life with so much more than I really need, and sometimes when it is stripped away, you are left to reflect more.

I wait on the curb to be picked up and am shocked by the lack of traffic. I must be in the wrong spot. This must not be the passenger pick up. And then I realized that I was at the Orange County airport, not LAX as many of my other trips were. And I was thankful. It’s the little things. 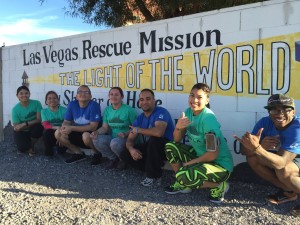